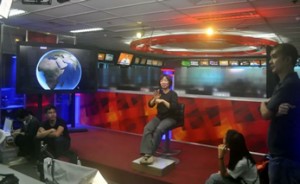 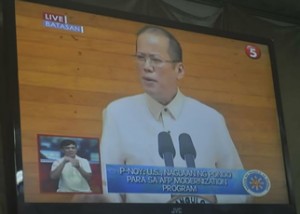 Presnillo is a resident interpreter of TV5. She regularly interprets the news and public affairs programs “T3” and “Aksyon Balita”. It was Esposa’s first time to interpret in the said TV station. He previously signed at GMA-7 for the past two years.

It has been customary for all Philippine Presidents to address the opening of the joint session of the Senate and the House of Representatives. This time, he spoke in the entire event in Filipino language. He cited his government’s successes for the past two years in alleviating poverty as well as his plans and priority bills for the next fiscal year.

“We hope that more news programs will provide inset interpreting in the future,” Mr. Rey Lee, President of the Philippine Federation of The Deaf, Inc. (PFD) was keen to emphasize. “We are currently setting up meetings with the Department of Education as well to discuss the use of Filipino Sign Language in the school curriculum.”