Skip to content
MCCID > About Us > History
Please support our sponsor:

MCCID for short, is a non-stock, non-profit foundation registered at the Securities and Exchange Commission (Reg. No.: ANO93-003927), last October 1993. It started when two young Christian computer professionals, one hearing and one deaf, dreamed of an educational institute that could concentrate on the needs of the hearing impaired through the use of computers. This field of work is fitted to them because it needs minimal supervision and communication skills. 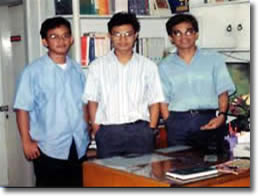 God has been so generous that after the falling out of the deaf, another equally talented yet more kindhearted and loyal deaf took his place. With the help of their hearing and deaf friends as well as the bulk of financial support from the Esposa family, they put up a foundation that would provide assistance to the deaf through computer education.

With the help of the former Manila Christian Computer and Technical Institute (MCCTI), a then well-established computer training school in Sta. Mesa, they arranged a tie-up program and became its foundation arm. Later on, family and friends who are knowledgeable in deaf and computer education and share the same visions and aspirations, gave both financial and intellectual supports.

By 1998, National Council for the Welfare of Disabled Persons, now National Council on Disability Affairs recognized MCCID as a foundation focusing on the needs of persons with disabilities with emphasis on the hearing impaired.

The millennium 2001 saw great milestones for MCCID. Its parent company MCCTI relinquished its hold on the foundation and became an independent entity. By 2002, MCCTI ceased to exist. Technical Education and Skills Development Authority (TESDA), the government agency tasked to regulate technical colleges and vocational institutions, in recognizing the potential of the deaf people to be productive citizens in the country through MCCID, decided to invite the institute to participate in its activities geared towards evaluating manpower skills and competence. By then, MCCID has reaped numerous awards and international recognitions. In 2003, MCCID has been fully recognized by the government to offer technical and/or computer courses for the hearing impaired; the first in the history of the regulating agency.

Later on, many local as well as international organizations have recognized MCCID as a technical institution for the Deaf in the Philippines. In 2004, professors and other deans of college in Tsukuba College of Technology in Japan visited MCCID. Also, delegates from the Asia Pacific Center for Disability based in Bangkok, Thailand had a short stopover at MCCID and observed how the school operates. The Philippine Federation of the Deaf (PFD), the only national organization for the Deaf communities in the Philippines, also recognizes the contribution MCCID made in helping the deaf populace. In 2007, Liliane Foundation, an international group assisting persons with disabilities worldwide, paid a special visit to MCCID and became its partner. The Department of Science and Technology – ICT Office (DOST-ICTO), formerly the National Computer Center (NCC) soon became an active partner due to MCCID’s expertise in matters related to information and communications technology for Persons With Disabilities.