Skip to content
MCCID > The Value of House Visits
Please support our sponsor: 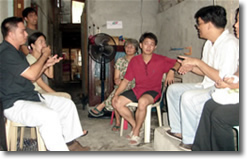 House/Home Visit activity was included as part of MCCID’s program of bridging the gap between deaf students and their mostly hearing families.

MCCID has been doing this activity for the past eleven years. This is part of the student’s Personality Development and Public Relations subject.

Home visits have renewed relationships among parents and their deaf child as well as developed personal bonding between the school and the family. It has been observed that most families don’t know how to communicate through sign language. So this has become an opportunity for the parents to talk to their children spontaneously with the aid of a sign language interpreter.

However, house visits are only done once in the entire three years of the student’s school life. This is in order to minimize the family’s hassle in preparing for it. Also, this is NOT BEING FORCED to the families. Through a letter of permission, the parents may opt to allow the school to visit them or not.

It All Started with One House Visit

Among all schools for the deaf in Metro Manila, only MCCID has this kind of special program. It started when students decide to have an unannounced visit to the house of one of their classmates after getting their government-issued documents (NSO Birth Cetiicate, SSS, NBI Clearance, etc.) needed for employment back in 1999. When the group arrived at the house, they were warmly greeted by the deaf’s parents and was introduced to other family members. They even hurriedly prepared a special merienda to the group.

During that afternoon, the deaf’s mother started asking varied questions like about his son’s performance in school and the reasons why he always goes home late. That’s when Sir Jojo started the direct interview between the student and his parent. He also inquired about their son’s background like the school where he studied during his primary years and the true reason of his deafness. The family was so happy that we dropped by their house. They even encouraged us to duplicate this to other families. Fellow classmates also clamored for their respective houses to be visited too.

After that activity, the school decided to make this a yearly program and all students must participate.

Why visit the family?

MCCID only observes the deaf student based on the perspective of the school. However, it must also understand how he behaves inside the house. He may be extremely obedient inside the school. But he acts like a king when he enters his own house. There might be some problem that needs to be addressed why he has opposing behaviors.

Parents usually shy away from coming to school. They feel that they are too overprotecting their deaf child. Their child might also feel suspicious why their parents visit the school. He/she may think that his/her parents enter the office because he did something wrong. Home visits can solve that problem.

Even some parents don’t care to visit the school. They just have too many excuses in not going to MCCID. In visiting their homes, the parents are on their own comfort zones and can freely do or say what they want.

Verifying and validating statements is also a valid purpose in doing home visits. A worried mother would call the school to inform that their deaf child must go home early because the streets leading to their house is dangerous. But then the deaf child would contradict his mother by claiming that he’s already grown up, can take care of himself and that his mother is just overreacting. Now who’s telling the truth?

In this activity, the parents are the main characters. The school will first send a formal letter to the family asking if they have a time for the group to visit their house which is always on a Sunday afternoon so that their work and other schedules will not be affected. After which, the student’s classmates together with their instructor and sign language interpreter will visit their house and have an intimate talk with the parents.

How did your child become deaf?

What were you and your family’s reactions when all of you found out that he/she is deaf?

These questions were very important for the deaf since almost all of them don’t have any slight idea why they were born that way. Some of them even concocted their own version of how they became deaf like they saw some folk fairies during their childhood or they fell from their beds while they were asleep when they were still babies. These were clearly explained by their mothers who really knew the reasons first hand.

However, issues like adoption, being born out of wedlock, both parents were blood relatives or other sensitive family secrets were being shared with utmost caution. The parents were asked first if they would like to reveal these things. If they decided not to, then Sir Jojo together with the teacher-in-charge will just turn off the sign language interpretation and simply talk about it discreetly.

Some people from other schools criticize or question the integrity of this program. They say that the school is intruding or minding the personal lives of each family. MCCID is going beyond the boundary of being just a deaf child’s second home.

Other families find visiting their houses a bother especially during Sundays where they are supposed to rest and spend their time focusing on household chores.

Another challenge is the logistics. Students who joined the home visits use their own money for transportation. MCCID shoulders the fare of its representatives. Until recently, home visits were only done within Metro Manila and nearby provinces like Bulacan, Rizal and Cavite.

However, in 2011, some of the families live in places such as Isabela, Pangasinan, Nueva Ecija and even in Sorsogon, Albay and Leyte.

But feedback coming from the parents and other members of their family were mostly very positive and favorable. They were able to ventilate their concerns to their child without any hesitation and sign language barrier. Most problems were solved due to clearer communication. Most parents were very thankful and appreciate the school’s gesture of spending time visiting their houses.

Some even compared MCCID with their deaf child’s previous schools. They were grateful that the school cares for their child by spending a few hours visiting them which they never experienced with even from schools of their hearing children.

Positive results and benefits far outweigh the challenges the school faced in doing these home visits. It may not have totally erased the communication barrier between the deaf child and his/her hearing parents. But MCCID was able to understand the deaf student on both perspectives which in turn used the information to provide him/her the proper guidance and care while at the same time sought the commitment of the entire family on how to deal with their deaf child.

Here are some of the links to previous House Visit Photos.