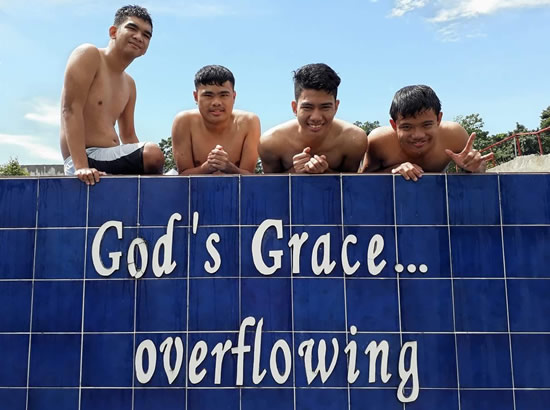 Constructed in October 2015, the 15 square meter recreational pool was completed only in March of 2016. However, subsequent improvements of the surroundings including the addition of a roof deck for water tanks and simple events area were completed by September 2017.

Named “God’s Grace Overflowing Pool”, the entire pool area is roughly 1000 square meters and is located at the back of the main school campus adjacent to its second floor deck floor. The pool is divided into a children’s Jacuzzi with a depth of 3 feet and the adult pool with a descending depth from 3 ft to 5 ft. It has its own comfort room and shower room. The area also has two “Bahay Kubo” cottages that can fit up to twelve persons and one “Bahay Kubo” which has a main dining area and air conditioned private room which has two beds for a family of five. The pool is overlooking the San Mateo mountains and the Timberland Hotel, the only 5-star hotel in the town.

Part of the school building’s second floor was improved to house a simple events area. It has rectangle wood tables and chairs with a kitchen sink. It also has a videoke machine which can also be doubled as a sound system.

MCCID students had a first taste of using it in March 2016 when the school held its culminating activity. Although the pool area is part of the Sports and Recreation Facility of MCCID College, it is also open for public as a private pool rental. It can accommodate up to 100 persons and can be used for special occasions such as Christian activities like baptismal services, birthdays, debuts, family gatherings and other celebrations.

The objective of this is to support the school’s scholarship fund for its deaf college students. So far, more than 1,000 persons from within the San Mateo and Marikina City area have already experienced the comfort and privacy of the pool.