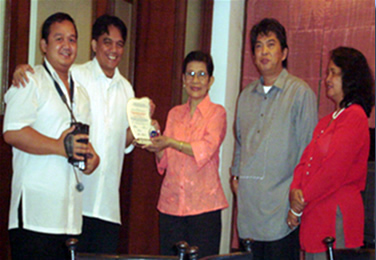 www.mccid.edu.ph, the official website of Manila Christian Computer Institute for the Deaf Foundation, Inc. is now the recipient of “3rd Disabled Friendly Website” of the Philippines.

Other recipients of special appreciation trophy include, Mr. Jojo I. Esposa Jr., for his lecture on best practices in designing accessible websites and an introduction on deafness, Mr. Reynaldo Mendoza, former webmaster of the De La Salle University website for giving his insights on using cascading style sheets and Mr. Conrado Ordesta III of Cebu Provincial Government for providing invaluable assistance during the National Webmasters’ Interface held last May 18 – 21, 2006 at Mango Park Hotel, Cebu City.

The awarding ceremony/luncheon was attended by Dir. Catalina L. Fermin of NCWDP, Ms. Grace Amberong representing National Computer Center – CICT and Mr. Solomon Paz of DSWD. Ms. Nelia De Jesus also of NCWDP was the day’s emcee. Mr. Leo Valdes of Vision Office Limited, one of the signatories in the plaques, is based in Canada. Aside from the awarding program, video presentation of the Cebu seminar was shown, recent accomplishments from the NCWDP Sub-committee on ICT was presented and initial meeting of core group discussion for the possible establishment of Accessible Web Designers of the Philippines.

From the first of three regional workshops on Web Accessibilty held at Tagaytay City last 2004, four institutions successfully pursued their goal of making their agencies’ websites accessible. The first agency that complied was the House of Representative authored by Ms. Dahlia Villacorte. The award was presented to her last June 2, 2005 with no less than House Speaker Jose De Venecia gracing the affair. The second recipient was the ATRIEV Website for the Blind authored by Ms. Lourdes Borgonia. They were awarded last December 12, 2005.

Ms. De Jesus, coordinator of NCWDP Sub-committee on ICT, also announced the fourth recipient which will be the “Web Development Team” of the De La Salle University Website. Mr. Rey Mendoza is one of the web designers of the DLSU Site. Awarding ceremony will be announced soon. All the four webmasters attended the first workshop. Aside from the DLSU site, she also informed the group that the fifth awardee will be the Cebu City Government website.

The award was given to MCCID “for creating the third disabled-friendly website in the country and generously sharing its expertise in developing accessible websites “gratis et amore” for disability-related organizations to boost economic opportunities for Filipinos with disabilities.” The National Computer Center – CICT is the sole government agency tasked to monitor and evaluate websites that complied with the 2003 Manila Accessible ICT Design Recommendations.