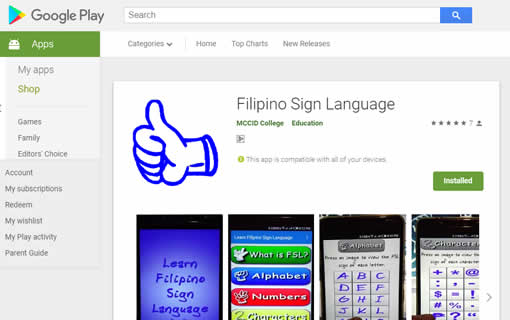 The first ever Filipino Sign Language App or simply called MCCID FSL App can now be downloaded for FREE under Google Play Store. 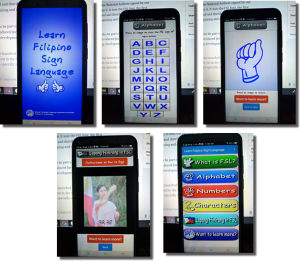 Uploaded in late February and updated in April 16 of this year, MCCID FSL App is a simple informative program that teaches how to fingerspell letters, numbers and special characters. It also has a video of Philippine National Anthem signed by a deaf using FSL. The app uses the original FSL Font designed by MCCID in 2009 and can also be downloaded for free by scrolling down the footer part of this website.

Although four other FSL apps have already been uploaded in Google Play Store Market, some are currently on beta or unofficially released version while others were available for download days after the MCCID FSL app release.

Now on its Version 1.5, it has already been downloaded more than 100 times and earned a 5 Stars Review based on 7 users. The app is compatible to all mobile android phones from Version 4.0 (KitKat) and above.

FSL has its own linguistic features like grammar, syntax, morphology and vocabulary. Like any other sign language, FSL is a visual language and does not follow any spoken or written language. It is not based on Filipino nor English language. Although it is heavily influenced by American Sign Language, it has it own structure and sign system.

Manila Christian Computer Institute for the Deaf College of Technology (MCCID College) is one of the pioneers in the adaption and promotion of Filipino Sign Language in the Philippines.

Among the objectives of MCCID College are:

With the designing of Filipino Sign Language Font, and now this simple FSL app, MCCID upholds one of its goal of recognizing and spreading the use of indigenous signs.

You may download and install the app for FREE from your Android by typing Filipino Sign Language on Google Play and look for the “thumbs up” logo.