Skip to content
MCCID > Announcements > Graduating class of 2010 prepares for job ahead
Please support our sponsor:

In preparation for their upcoming On-the-Job Training and future employment, the graduating class experienced first hand how to apply for important government documents and credentials needed last January 18 and 20.

All 20 deaf students braced themselves as they meet the challenge of acquiring forms and documents on a government facility. They bravely fell in line, asked for directions, sought assistance and carefully read signs and intructions posted on the walls and billboards. All without the aid of a sign language interpreter.

On the first day, they went to the National Statistics Office in East Avenue, Quezon City. They mainstreamed with regular people in filling up forms, waiting in line, having their names called and answer interviews in order to get their original birth certificates. 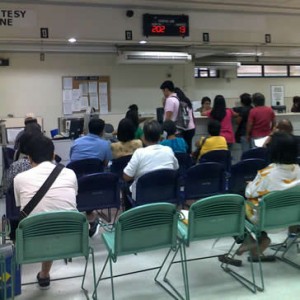 After getting their receipts and certificates, next stop was the Social Security System accross the street. They applied for the SSS ID Numbers. Only students living in Quezon City were accommodated. Others who live in various cities applied on the next day. SSS Number is an important credential in applying for jobs.

Third stop was at Quezon City Hall to get their Community Tax Certificates or commonly called “Residence Certificates” for 2009. Nearby was the QC Social Welfare Office. So they were also able to apply for their Persons With Disabilities Special ID.

On the 19th, the students were again challenged to get their National Bureau of Investigation (NBI) Clearances. The head office is in their new location at 5th floor of Victory Central Mall in Caloocan City. This was pretty much a challenge for them because their subject teacher (Sir Jojo Esposa) did not allow them to go to the Courtesy/Disabled Persons Lane. They have to experience the same difficult task of getting it as with regular people. So they followed the steps on how to apply based on what they see on big billboards and doing what other people does. 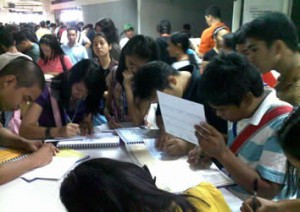 In the afternoon, deaf students living in Manila went to Manila City Hall to get their Residence Certificates and applied for PWD IDs. All throughout the activity, their instructor patiently guided them at a distance.
On the third day, they were able to apply for their PhilHealth cards in Quezon Ave., Quezon City.

Going through these activities strengthen the deaf person’s feeling of independence and giving them a taste of what the real world is experiencing.

Also, preparing this before they graduate is important so that they won’t be cramming about it once they are ready for applying for jobs.
This activity is part of their Pre-employment Preparation Subject under Values Education. MCCID has been doing this since 1995.