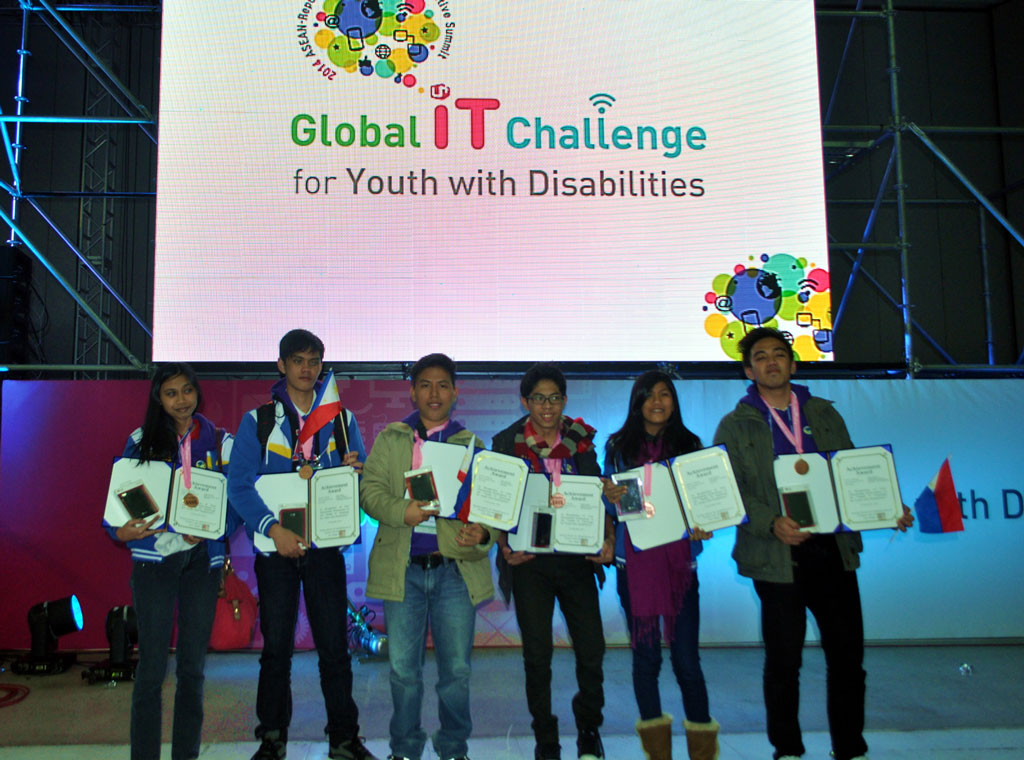 Nathaniel Edward Q. Dimalanta from the Philippine School for the Deaf (PSD) won the gold award in “eLifeMap Challenge” while Janielle Alonzo Salvador also from PSD bagged the bronze award in “eTool Challenge”. The Philippines also captured the bronze award in the team category for “eCreative Challenge” that showcased their creativity to do animation using the Scratch online program. The team was composed of Nathaniel and Janielle together with Jonathan Jumuad Co (Deaf) and Rhold Michael Fernandez Jr. (Deaf) both studying at the Manila Christian Computer Institute for the Deaf College of Technology (MCCID), Mary Ann Medura Rollon a graduate of STI College and Wawel Acabado Quidoles from the Philippine National School for the blind who are both visually impaired.

Aside from medals and certificates, the gold winner received a brand new 15” laptop, while bronze medalists received a digital camera and 1 terabyte (TB) external hard drives.

A total of 104 contestants and 80 government personnel and professionals from 10 countries of the Association of South East Asian Nations (ASEAN) together with the host Republic of Korea participated in this year’s event. Held since 2011, this activity is organized by the Korean Society for the Rehabilitation of Persons with Disabilities (KSRPD) in partnership with the government of Korea. Its main objective is to solve the digital divide and use ICT as a window to communicate with the world for Persons with Disabilities as well as improve their accessibility and quality of life.

This year’s occasion is special because it became part of the summit, which was attended by leaders from all countries held at the same venue from 11-12 December. First ladies from Thailand and Laos graced the affair together with top officials from UN-ESCAP and the host country.

The Philippine Team was coached by Mr. Remberto I. Esposa Jr. of MCCID, Ms. Marietta C. Regala of the Resources for the Blind (RBI), and Mr. Dandy C. Victa of the National Council on Disability Affairs (NCDA) who served as the head of the Philippine Delegation. Mr. Victa also presented the “National Strategy on the Accessibility for Persons with Disabilities” during the IT Forum as part of the event. The Philippine participation to the annual GITC is supported by the DOST-ICT Office and the National Council on Disability Affairs.

About DOST-ICT Office – The Information and Communications Technology Office of the Department of Science and Technology is the Philippine Government’s lead agency on ICT-related matters. Its primary thrusts are in the ICT Industry Development, eGovernment, ICT policy development, Internet for all and Cybersecurity.

About NCDA – The National Council on Disability Affairs (NCDA) is the national government agency mandated to formulate policies and coordinate the activities of all agencies, whether public or private, concerning disability issues. As such, the NCDA is the lead agency tasked to steer the course of program development for persons with disabilities and the delivery of services to the sector.

The Philippine delegation to the Global IT Challenge for Youth with Disabilities win Gold and Bronze in the eLifeMap Challenge and the eTool Challenge category. The event which drew more than a hundred contestants from 10 countries was held in the Republic of Korea (ROK) was held to coincide with the ASEAN–ROK Commemorative Summit. 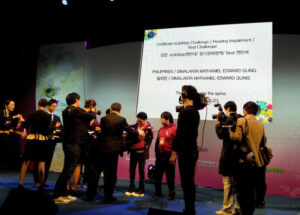 Original Article copied from the Department of ICT Official Website.