Skip to content
MCCID > About Us > Meet the MCCID College Deaf Trainors
Please support our sponsor: 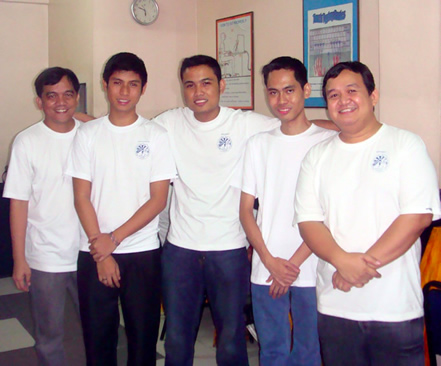 MCCID College of Technology is very much blessed for having one of the best crop of highly skilled Deaf trainors/faculty this school year. The school always stands by its mission of developing new deaf talents and harnessing their skills in order to produce qualified people who would then share their knowledge to the rest of the Filipino Deaf community.

Sir Ervin holds the position of Overall Deaf Coordinator in MCCID. He is also teaching all computer and design subjects. He is also one of the members of the Board of Trustees of MCCID College of Technology.
As a veteran in the field of computer education for the deaf, he has been with MCCID since its inception in 1993. He has won numerous awards and recognitions both locally and internationally including the bronze medal in Web Designing during 6th International Skills Competition held in New Delhi, India. He also represented the country in International Deaf Missions Conference in South Korea in 2009. He graduated as “one of those” during his high school at Philippine School for the Deaf (PSD) and college at Cap College Foundation finishing Associate in Arts in Information Technology. He also took up Computer Hardware Technology in the then Manila Christian Computer and Technical Institute, a vocational school for hearing people. However, after his enough exposure in MCCID, he was able to achieve great successes. That’s why both PSD and CAP presented him with Outstanding Alumnus recognitions. He also received the Most Outstanding Teacher award given by City of Mandaluyong in 1998. Here is a link to an article about Sir Ervin. [ Facebook Profile ]

Sir Jerome is currently the Computer and Deaf Culture Trainor as well as physical education. He is also the Student Organization Adviser and currently the Officer In-charge with the activities of MCCID Campus in Pampanga and Tiaong, Quezon.

Sir Jerome already shown stellar marks during his high school days. He excelled in various subjects as well as in sports activities. He was awarded Valedictorian at San Lorenzo Ruiz Integrated SPED Center in Baguio City. He was then qualified as a full-scholar of MCCID when he took up Diploma in Business Technology. His leadership skills and persuasive personality made his peers vote for him as president in their student organization for two years. While juggling his time in extra-curricular and academic affairs, he also excelled in basketball and other sports activities. He was awarded Salutatorian by MCCID as well as Leadership and Best in Computer Assembly medals during their graduation rites 2009. He was one of the deaf who made a skills demonstration in Jobs and Trades Fair sponsored by various government agencies and attended computer workshops including the Australian Disability Forum. He also represented the country in International Deaf Missions Conference in South Korea in 2009. Sir Jerome designed the official website of his high school. [ Facebook Profile ]

Sir Ace belonged to the top three of his graduating class at Philippines School for the Deaf. He also received some curricular awards in high school. At MCCID, he also exhibited leadership qualities by holding positions in the student organization. He received 1st Honorable Mention recognition when he graduated at MCCID in 2009. He was also the recipient of Best in Computer Operations and Web Designer of the Year award also in the same year. After six months of rigid training in supervising students, the school gave him a chance to become the computer trainor in Tiaong, Quezon Campus. Ace is also conducting computer workshops to Kasamaka CBR of Makati every Saturday. Sir Ace designed the official website of Deaf for Christ Church in Quezon City. [ Facebook Profile ]

Sir Lucky is currently the Computer and Physical Education Trainor of MCCID College Pampanga Campus. He is also the Adviser of its student organization.

This good looking young man is a graduate of Bible Institute for the Deaf. In that school, his skill in designing and theater arts were developed. He has performed in countless programs and invitations from many occasions. But it is when he studied in MCCID where his talents were greatly utilized and harnessed. He won in several inter-school computer and visual arts competition. He also gave demonstrations in Jobs and Trade Fairs sponsored by the National Council on Disability Affairs. His leadership quality also earned trust from his schoolmates by voting him president in school year 2009-2010. He took up Diploma in Arts and Computer Design Technology and received the Leadership Award during their graduation rites. He also participated in various government sponsored conferences including the Philippine Human Rights Action Plan and the first CBR Congress. [ Facebook Profile ]