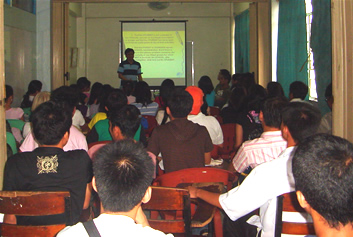 Despite the worldwide scare of H1N1 virus which has spread in most Metro Manila schools, School Year 2009-2010 classes opened smoothly in both the main Quezon City campus and the first branch in Tiaong, Quezon of MCCID College of Technology last June 15. 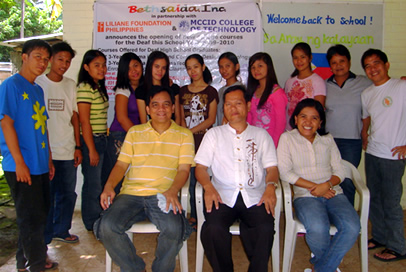 A total of 51 freshmen students, the biggest number in the school’s 15 year history, attended the Orientation Seminar on the first day of classes. MCCID’s Tiaong, Quezon branch also had their seminar on that day with nine first year students. Together with second and third year deaf students, sign language class and Quezon branch, the overall student population rose to 104.

This is the first time MCCID experienced a surge of students coming from the provinces. Some came from nearby Pampanga, Cavite, Nueva Ecija and Tarlac to as far as Cagayan, Albay, Camarines Sur, Leyte and Bohol. This proves that there is a need for opening up of higher education programs for the deaf in many parts of the Philippines and not just in the National Capital Region. This also established the power of the Internet and the huge impact of this website.

It is also interesting to note that only one student came from Philippine School for the Deaf (PSD). It was later learned that most of PSD graduates lived from the southern part of Metro Manila. So most of them enrolled in colleges for the deaf located in nearby Makati City and southern Manila. 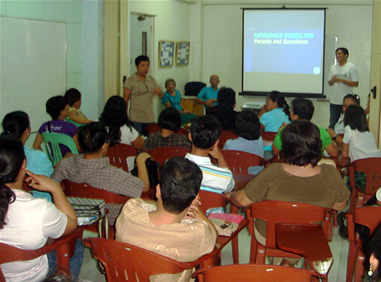 Last Saturday, June 27, the annual “Meeting with the Parents” were held in the afternoon where parents/guardians of freshmen students were invited. Out of the 51 parents who were expected to attend, more than 30 participated.

The activity is basically the same as orientation with students although most of the program focused on the question and answer portion. The parents introduced themselves and explained about the cause of their child’s deafness. MCCID through it’s Training Director, Sir Jojo Esposa explained about the school’s method of training the Deaf and it’s successes and highlights during its more than 15 years of existence.