“A Tribute to Parents” is this year’s theme

A truly memorable ocassion greeted the parents and relatives of the Batch 2008 graduates when they celebrated MCCID’s Tenth Commencement Exercises held at Town and Country Hotel and Restaurant last May 21, 2008.

Dubbed, “A Tribute to the Parents”, thirty six students who finished the academic requirements marched on the stage accompanied by their proud parents. This year’s celebration was different from previous programs held. There were no invited special guest lecturers unlike before when the school invites politicians, church leaders and government officials. The stars of the show are the graduates’ parents who did a very difficult job of raising their child despite great odds in coping with their disabilities. 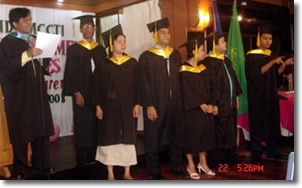 Selected parents led by Mr. Florencio B. Rañola Jr. (Ma. Ivy Rañola’s Father) and Mrs. Neonita U. Matias (Pia Joy Matias’ Mother) gave special and inspiring messages for their co-parents and the graduating class. For their part, the students made very special gifts and presented them to their parents including some tokens from the school. More than 140 people attended the affair.

Twenty one candidates from Batch 2007-2008 were joined by fifteen graduates of class 2006-2007 because there was no commencement exercises held in 2007.