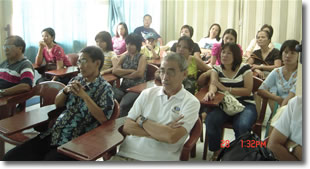 Classes for First Semester under School Year 2008-2009 opened smoothly last June 16. An orientation of rules, procedures, curriculum, calendar of activities and other concerns was held for first year students in the morning while a refresher one was given to the second and third year classes.

Aside from the orientation, the “Peace Agreement” was explained and signed by the students. A total of 83 students are currently enrolled this semester. They are broken down as follows: 28 – First Year, 26 – Second Year and 26 – Third Year and 3 from Sign Language course.

Also, last Saturday, July 5, the annual “Meeting with the Parents” were held in the afternoon where parents/guardians of freshmen were invited. Out of the 28 parents who were expected to attend, 22 participated. The activity is basically the same as orientation with students although most of the program focused on the question and answer portion. Most of the parents were interested to know about MCCID’s program, method of training the Deaf and successes made by the school during its nearly 15 years of existence.