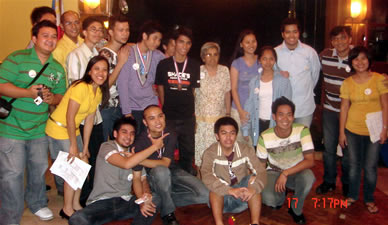 Drama, comedy, masquerade and fun filled activity commemorated MCCID’s 15th Founding Anniversary last October 17, 2008 at Town and Country Hotel.
Each year level were divided into three groups. Each of them presented their comedy skits and dramatization of deaf culture. Winners received medals and special recognitions. They were judged according to the clarity of their theme, full participation of each member, props and special effects and audience impact. The members of the Board of Judges include Sir Oscar Purificacion, Sir Jefferson Cortez and Ms. Emilie Padullon. The presentation of second year students will be included in the final grades of their Deaf Culture subject while each comedy skit was evaluated by the judges from among the three selections; “Very Good”, “Good” and “Fair”. 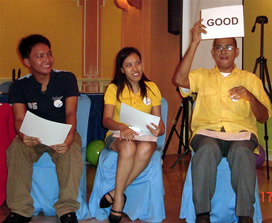 For his part, Sir Jojo Esposa, MCCID Training Director, accepted the gifts and thanked the student organization in behalf of the school administration. The two items are already displayed on the school’s lobby replacing the old styrofoam A-B-C Sign Language Board.

Group directors pose together with the judges and administrators.
The celebration ended with a feast of Filipino dishes with which everybody was completely satisfied.

In a separate activity, Mrs. Remedios Esposa, MCCID Registrar presented special Certificates of Recognition to the directors and overall leaders of the group last Wednesday, October 22 at MCCID Lecture Hall. She also gave each of them I-L-Y keychains and congratulated them for the remarkable efforts they did during the foundation day celebration.