The first and only Filipino Sign Language Font is now available for FREE and is ready for download. Called MCCID FSL FONT, this type belongs the the Dingbat fonts. A dingbat is a term used in the computer industry to describe fonts that have symbols and shapes in the positions designated for alphabetical or numeric characters.

The MCCID FSL Font has all the equivalent alphabets and numeric characters that are used in finger spelling and hand sign. The hands used are similar to those with white gloves so special markings like fingernails and hand lines don’t appear. The characters are comic like to make the letters more clear and easier to copy. 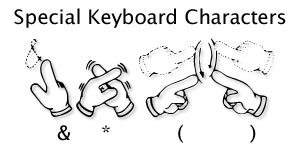 MCCID FSL Font is different from other sign language fonts because it presents the uniquely Filipino signs of the letters “E” and “G”. Aside from that, it also has equivalent hand signs for 29 special keyboard characters including the ampersand (&), dollar ($), per cent (%), etc. A total of 65 characters are represented in signs. 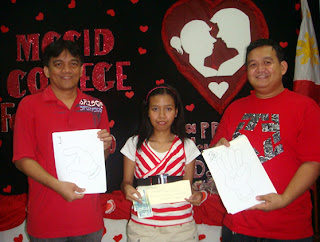 MCCID FSL Font was launched during the Awarding Ceremony last April 8. Sir Jojo Esposa demonstrated how this font can be installed and used in the computer. A font design contest among Diploma in Arts and Computer Design Technology students were held in January of this year. Out of ten students who competed, the entry of Jennyfer Cahilig won. The announcement was made during the Valentine Program held last February 22. Jennyfer received P2,000 cash prize. Each finger sign she designed was then scanned and converted into fonts.

MCCID aims for the font to be accessed and installed freely to anybody’s computers in order to promote the learning of sign language and increase people’s awareness in learning this special language of the Deaf people.

A special Facebook Fan Page was created so that people can freely access the font and its feature. There are already 254 people who liked it as of April 30.

How to Install MCCID FSL Font

For Windows Vista and 7:

Installing fonts are easy and quick. Do this. 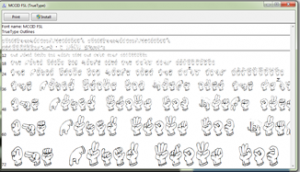 Please go to the following links for instructions on how to install the font in different operating systems.